Spell Combinations are created by queuing up to five of the Elements and using one of four basic attacks. An in depth explanation of how the casting system works, created by Stergeary, can be found here.

You can also find a quick summary of the most efficient combinations here : http://www.youtube.com/watch?v=3PPFr2C7SZQ 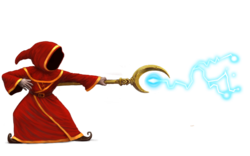 Projectiles ranging from pebbles to boulders.

Spread of unpredictable ice shards that can be charged for powerful long-range hits.

Sprays and lightning arcs made of raw energy. 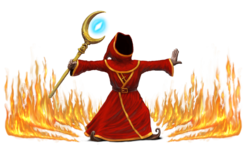 Additional elements increase nova radius for all elements and damage for Lightning, Cold, Ice and Steam. 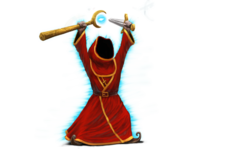 Casts a single element on yourself. 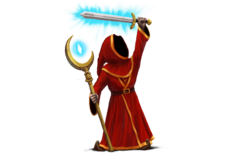 Travels into the direction the caster is facing. Ignores some elements.

The four cast modes of Shield all provide some form of protection to the player, and the mode of casting simply effects the arrangement:

Note: Self-casts do not stack. Casting a new self-cast will replace the existing one.

Casting Shield alone, or using a solid element (Earth or Ice) with a Shield element creates a protective armor suit around the player that absorbs physical damage, but slows the player down and does not provide protection against status effects on its own.

Caster gains an aura that grants immunity to a certain element to ALL players or monsters within the range. Opposite Auras cancel out. The aura lasts for 15 seconds, and stacking elements increase radius and time by 5 seconds. There is no limit on the amount of damage it can absorb, making it very useful for resisting high damage spells such as thunderbolt, or element-based damage with dangerous knockback (goblin bombs).

All Shield Force, Area, and Imbue casts are the same except for where it is cast:

As with Self-casts, using Shield alone or with Earth or Ice produces something different than the others by themselves.

Walls provide physical walls to block enemy attacks. Walls may have an effect when they rise, when they are struck, if they explode upon death, as well as possessing a passive spraying effect to their surroundings. Some general information:

does NOT produce a Lightning explosion

Combining a Shield with a Beam element gives you mines. Mines are detonated when anyone passes over them, including you! They also detonate if more bombs are placed on them. If you are inside a barrier or wall, mines can be laid outside them.