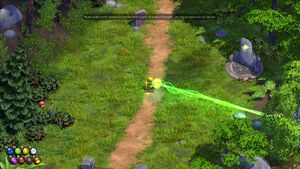 A Life beam that heals players or monsters.

Force casting is the basic ranged attack. Beam-type force attacks (I.E. Arcane) do single-target damage. Force attacks are performed by queuing up one of the Spell Combinations and pressing right-click. Beam spells can be sustained by keeping the right mouse button held down, while projectile spells can be made to fly further by holding down the right mouse button longer before releasing it.

If no element is queued when force casting, then a basic pushback effect is created in the direction the wizard is facing.

Area of Effect casting does damage to all surrounding enemies. AoE attacks are performed by queuing up on of the Spell Combinations and pressing shift + right-click.

If no element is queued when casting AoE, then a basic pushback effect is created in all directions around the wizard. 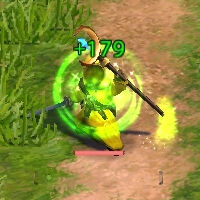 Healing yourself with the Life element.

Self-casting casts a spell on yourself. Self-casting has the potential to kill yourself if you are not careful. It also has other uses such as a removing one of the negative Player States or healing/shielding yourself. Mouse wheel click to use.

If no element is queued when casting self-cast effects, then the current staff's active ability is cast instead (if the staff has an active ability and it is not on cooldown).

Note: The rule of opposites still applies when imbuing a weapon that is already imbued. For example, a weapon imbued with

will be reduced to a normal weapon when imbued with